Abstracts from October, 1873 show the conveyance of 320 acres from the United States to E.B. Murphy for the purpose of establishing a town that is now Arapahoe. After subdividing the town and several title transfers, Elizabeth and Lewis Clute acquired the property on which Arapahoe Pharmacy now stands. Starting with a wooden structure built in late 1878, the Clutes grew to own several businesses including a hotel (on the site of the present Senior Center), a livery, and a dry goods/hardware & harness store (on the site of the present pharmacy and theater).

Business began to decline in 1885 followed by a depression in 1886 due to drought and subsequent crop failures. Eventually the stores and hotel were closed with the space rented or sold. Abstracts indicate ownership by Swafford Brothers Dry Goods in the early 1890s on the present pharmacy location. Elizabeth Clute recouped the property after foreclosing on Swafford Brothers on July 27, 1898.

A fire in a storeroom of the hotel in September, 1898 destroyed the Clute Hotel and buildings where the theater and pharmacy now stand. These destroyed properties were purchased by Joseph Einstein and William Helmann. Einstein built the structure that is presently the Arapahoe Senior Center, while Helmann built the structure that now houses the Crystal Theatre and Arapahoe Pharmacy.

Floyd Morris purchased the inventory and fixtures on September 15th, 1935, for $4200. Records show that on Floyd's first day of business, the sales were $4.50 (in the the midst of the Great Depression.) The store was remodeled in the mid-1940's to move the foundation to the back of the store and converting the shelving to self-service. In 1953, the plate-glass front and aluminum awning were added, giving the store the appearance that you see today.

In 1985, John and Ingrid Tangeman (Floyd's daughter and son-in-law) purchased the store. Upon their retirement in 2021, the pharmacy was purchased by Mark and Sheryl McCurdy. Mark and Sheryl pledge to provide leading edge pharmacy services and care to the area while maintaining the history and tradition of the old style soda fountain. 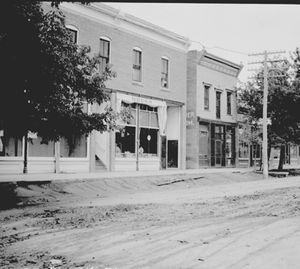 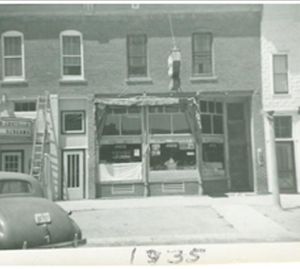 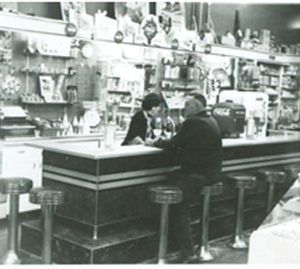 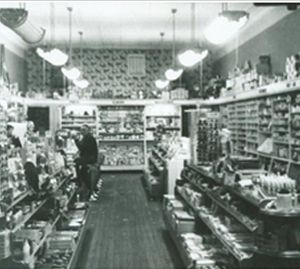